Pulled Pork and Beans Throw Down!

This week we had pulled pork and baked beans from Bobby Flay’s Throwdown! cook book.

The boys and I really like to watch this show on Food Network as a Wednesday night wind down so they bought me the book for Christmas. I like that Bobby Flay has proven to be an excellent model of sportsmanship. He is obviously a very competitive man, but win-or-lose, he is always very gracious – a great example for certain young men that I know and love.

I won’t write the recipes here, since they are directly taken from the book shown above, but the bean recipe is on the internet (here) as well as a different version of the pulled pork recipe that you can find here, but the version in the book is much easier for home cooks to follow.

In general, pork and I do not get along in the kitchen. I am terrible at pork chops. The NHL could use them. However, I’m married to a Georgia boy who grew up eating pork in all forms, including pulled pork sandwiches from a local dive called Piggy Park – only in the South. Anyway, trying pulled pork the first time was daunting given my record but I have mastered it. It turns out, that with eight or nine hours of perseverance, even pork will give up and get tender so that is how I wage this particular culinary war. Maybe someday I’ll revisit the chop.

The process for pulled pork, according the recipe I was using on this occasion, starts the night before with the mixing just about every ingredient in your spice cabinet into a rub for the pork. It smells great!

Then the pork shoulders spend the night in rub. 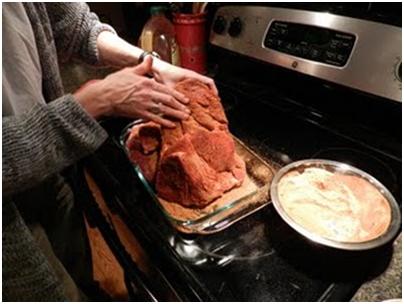 In the morning they come out of the fridge looking like this.  Good morning, pork.

For the first four hours they are exposed to the air in a 250 degree oven with apple juice in the bottom of the pan. I used a turkey baster to periodically drizzle them with apple juice so they wouldn’t dry out.

After four hours, they come out of the oven looking like this and ready for the next step.

The next few hours are spent wrapped in foil with apple juice – a new take on pigs in blankets.  I guess you could call this pigs in wet blankets. 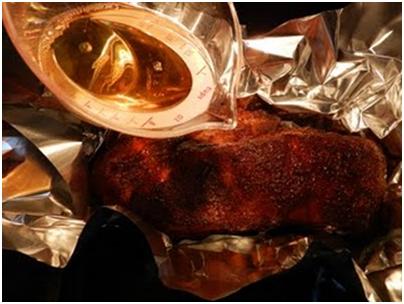 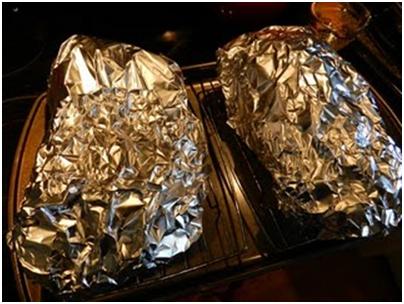 It stays in the foil until its internal temperature reaches 190 which is well above the point at which my meat thermometer begins telling me that pork is done. I have to turn off the alarm or it would wear itself out.

When the time comes, let the meat rest and cool for a few minutes before pulling it between two forks to achieve the shredded texture pulled pork is known for. 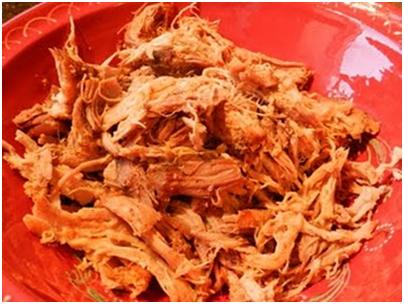 I used the BBQ sauce from the baked bean recipe to pour over the meat, but you can use any sauce that suits you. I fell down on the blogging job when we started eating and forgot to take a picture of the finished sandwich. Sorry.

On to the beans…

Here’s what goes into the pot when you’re adjusting to feed twenty-five. 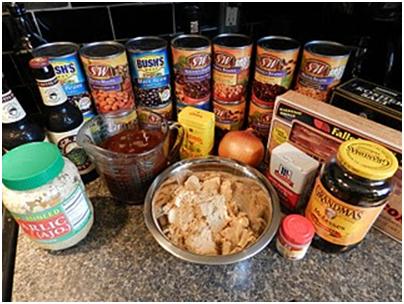 This recipe has you making a custom barbeque sauce, browning bacon, and sautéing onions to start. 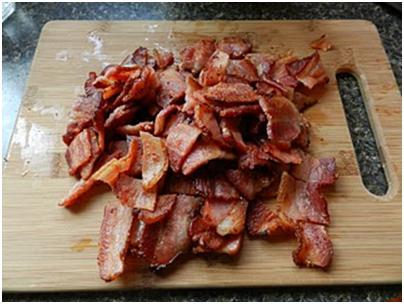 This is when I wish I had a ZANS! (You can be the comment queen of the day if you know what I’m talking about.)

Again, I forgot to take a picture of the finished beans, but they were good, and the leftovers made great quesadillas. I’ll blame my failure to photograph on these guys arriving.

At least I finally remembered to take a new picture of them. They’re a great group! A few are missing so we’ll do this again if I can hold the thought.

Here was their dessert. 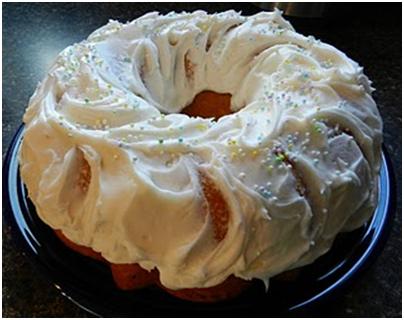 From: Uncategorized
← Strawberry Pretzel Dessert
Victorian Tea – View into the Kitchen →
No comments yet