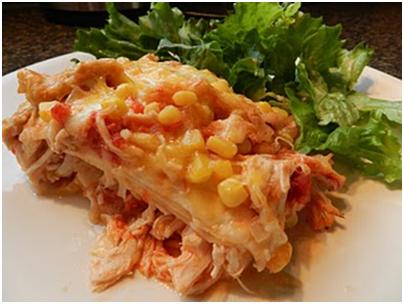 When we’re getting ready to move I start to operate under a self-imposed grocery buying moratorium and use up what’s in the cabinets. The creativity that emerges usually doesn’t result in anyone saying, “Ooooh, make sure you write this one down!” but a few nights ago we hit on a keeper – a cross between enchiladas and lasagna.

I had a handful of rotisserie chicken in the fridge and Mr. Nobody left the bag of tortillas unsealed, so they weren’t supple enough for most ordinary applications. I also happened to have enough diced canned tomatoes to feed a small army, and corn enough for a platoon. All of this coupled with the vague recollection of a recipe in one of my Cooking Light cookbooks sparked an idea.

I chopped the onion finely, and sautéed it with minced garlic (out of a jar) in about a TBSP of olive oil. 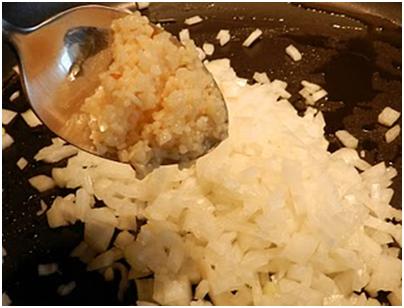 I cut the tortillas into strips that would act like lasagna noodles. (Note that spelling and see my rant below!) I also cut a few slices of pepper jack cheese into thin strips and dug out a handful of shredded cheddar.

By that time the garlic and onion were heated through and softened. I added the shredded chicken and stirred periodically until it was hot. 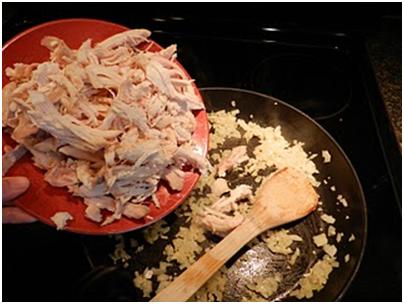 Then I dumped in well drained cans of corn and diced tomatoes. 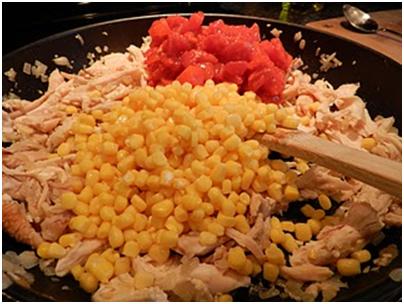 One and a half cups of chicken broth combined with about half of that can of spicy El Pato salsa made the sauce that would be poured hot over the top of all the layers. I put it on the back burner on medium heat while I finished working on the rest of the dish.

Half of the tortilla strips went down in a disorganized layer. 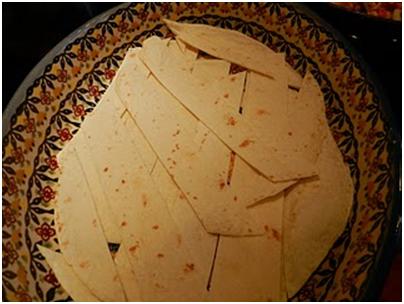 Then I dumped half of the corn, tomato and chicken mixture in and spread it around.

Then half of the pepper jack cheese on top of that. 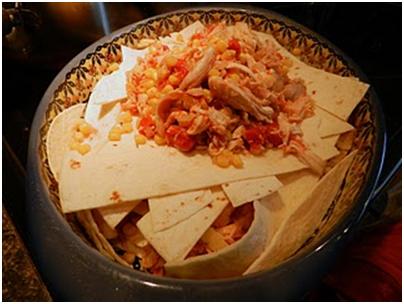 The sauce was poured over the top.

Cheddar cheese got sprinkled on last.

It was baked in a 450 degree oven for about 15 minutes until the tortillas were golden brown at the edges and the cheese was thoroughly melted.

We served it with a dollop of sour cream and garnished it with surprised smiles – cabinet cleaning wasn’t so bad this time! In fact, it was good!

Okay, done with the food….now, back to that spelling issue! Did you notice how noodle is spelled with an “l-e” at the end, yet pretzel and tassel are spelled with “e-l”? Admittedly, I stink at spelling but that sort of thing makes me want a refund on my native tongue! If English was run by Adobe, Apple or Microsoft there would have been an update by now!

BUT, Since it’s up to me…here’s my new rule to remember this:

“L” before “e” in
Noodle, Poodle and Puddle
Causes me no fuddle,

While “e” before “l” in
Pretzel and tassel
Causes me great hass-l-e!

P.S. You will be relieved to hear that I just bought a book on how to take pictures of food. If there is any honesty dust-jacket description, then eventually the photos will improve. 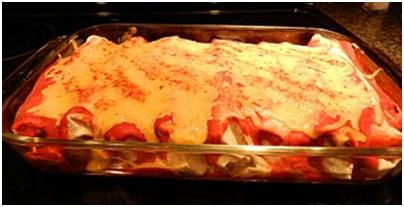 These don’t blow-your-socks-off or inspire speculation about secret ingredients. They’re just simple, easy goodness. That’s why my children like them.

Sauce: Before I start the filling, I begin heating the tomato sauce, chili powder and cumin in a pan. It just needs to get hot before you add the cornstarch dissolved in water to thicken it. (I don’t understand why you have to dissolve the cornstarch in water, but you do. It stays grainy and gross if you dump it straight in – kind of like cornmeal in chili.)

Of course, you could just buy a can of enchilada sauce, but I don’t usually plan that well. I almost always have tomato sauce on hand though and dressing it up makes me feel like a real cook.

The filling is simple. I don’t have the patience for artistic layering of ingredients into tortillas. I plop it all into a bowl and stir it together. The salsa and enchilada sauce go in last so that I can make sure not to add too much. Indiscriminate dumping can turn the whole project sloppy.

Imagine a cup of shredded cheese in these pictures. I forgot it. Bad blogging, I know. But, the enchiladas were still very good and my hips were better for the omission.

The next step is assembly. I start by spreading some of the sauce on the bottom of the pan. Then it’s time to roll.

I’m never going to be a hand model!

Thanks to JP for the nice set of action shots.

Pour sauce over the top. 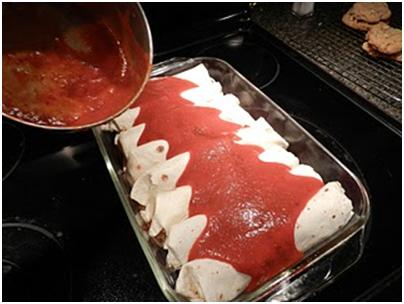 Sprinkle on the cheese.

Bake in 350 degree oven for 35-40 minutes. You want the cheese bubbly and hot. The ingredients are all pre-cooked so it’s just about getting them nice and hot.

Oh…and I forgot to mention that I sprinkle paprika on top when I want the finished pan of enchiladas to look pretty for company or for blog browsers. It doesn’t mess with the flavor, but it looks nice and this is a catwalk. The models must accessorize!