I know this isn’t an end-of-March dish, but March has been full of November here on the Palouse, so we’re still wallowing in winter comfort food. This is one of our favorites for a bone chilling day. 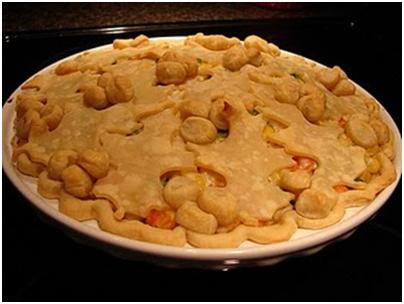 I start with the carrots first because they need time to cook. They get chopped with my usual imprecision and placed in a small sauce pan with plenty of extra water to simmer on medium heat while I work on the sauce. Later: When they are tender and the sauce is nearly done I dump the frozen peas and the drained can of corn in and bring the water back to a boil for just long enough to tenderize the peas and heat the corn. If you start them all at the same time, the green and yellow will be mush by the time the orange is tender.

Next I chop the chicken. My favorite is a rotisserie chicken from the grocery store, but any chicken will do.

The next step is to start the sauce. See All-Purpose White Sauce AKA “Cream-of-Whatever” for instructions.

While the sauce is thickening, I start on the crust. I wish I could say I do this from scratch, but the truth is: I usually don’t. But I’m planning to get better about that. 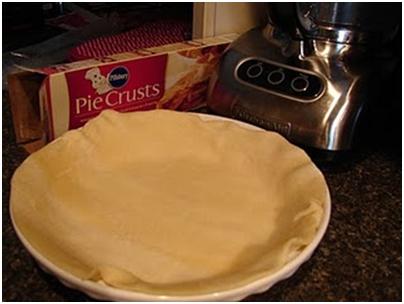 I’m not proud of the perfectly able bodied food processor next to the Pillsbury box.

After spreading one of the rolled out crusts in the bottom of the pie plate, it’s time for some play-dough style fun – unless there’s a child on hand. Then I maintain my dignity and let them handle the next couple of steps.

I (or the child) get out a cookie cutter and cut the dough into shapes, usually leaves. Then with the scraps that are left, we make snakes!

CAUTION: Don’t let child helpers become emotionally attached to their snakes. The next step is to chop the snakes to bits and roll the bits into balls.

Waiting on the Filling

Those little balls turn out to be the stuff my family squabbles over when the pie is finished. After all, who doesn’t like little balls of pie crust! The trick is to keep dough lovers from eating them before they make it into the oven.

The veggies and the sauce are about done by now. Turn the oven on to pre-heat at 375 degrees.

Stir the chicken into the sauce.

Drain the vegetables thoroughly before adding them to the sauce. I let them stand and dry for 3-4 minutes in the strainer, because wet carrots and their friends can ruin the sauce you’ve worked so hard to thicken. 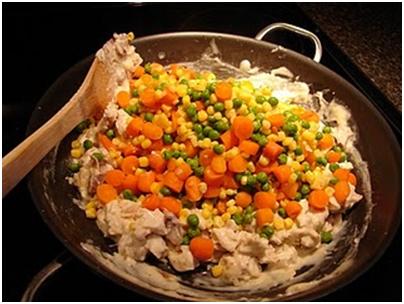 Bring the sauce back to steaming hot on the stove before filling the pie plate otherwise the crust will be soggy.

Arrange the fruit of your art atop the steamy filling. I like to group the little balls of goodness into threes. It looks pretty that way and it allows my children to practice skip counting while they’re making sure nobody got more than their “fair” share.

Bake at 375 degrees for 15-25 minutes until you like the look of the crust. If you like a really crispy crust you can bump the temperature up a bit.

Not Perfect – but Very Tasty!

This one probably could have used another 5 minutes or so in the oven, but it was already about 7:00PM and the boys were circling the kitchen like piranhas. It was better to sacrifice blogging perfection than keep them waiting any longer.

The fancy French word for this sauce is “Béchamel”.

I call it “Cream-of…” sauce, because it’s basically what you get when you buy a can of cream-of-mushroom (or cream-of-whatever-else) soup to use in cooking – only it’s better – and it makes you feel like a real cook.

Variations on this sauce form the base for homemade macaroni-n-cheese, Alfredo, tuna casseroles, creamy soups, pot pie fillings, biscuits-n-gravy and more. It never stands alone in the form you see below, but knowing how to get the base layer accomplished is a handy tool for so many recipes.

Start by melting the butter on medium –low heat. When it’s bubbly, toss in the flour. (Other fats can be used according to recipe directions, and vegetables can also be added to saute at this stage but otherwise the procedure remains the same.)

Mix until it makes a smooth paste. Keep stirring until it is bubbly again and the butter begins to turn golden. The flour needs to cook a bit at this stage to avoid having a pasty texture in the final sauce. (Keep the heat at medium or less and go slow if this is a new procedure for you.)

Begin slowly adding milk – about ¼ cup at a time to start with and mix everything back into a smooth paste before adding more. 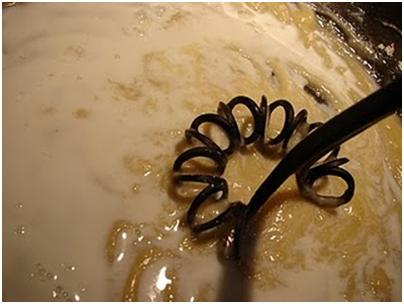 Add more milk when it’s back to looking like this.

After the first cup of milk has been added and the sauce is thinning out, I go ahead and dump the final cup of milk in all at once. It will then seem too runny, but as it simmers over low-medium heat for the next 10-15 minutes it will thicken considerably. While it’s simmering it needs to be whisked frequently (at least every 60 seconds) or it turns into various kinds of messes. Add salt and pepper to taste – which, of course, means you have to taste it. 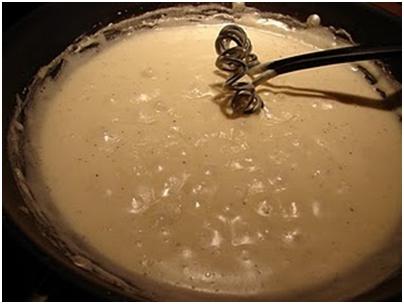 This is about where you want it for sauce – to add cheese, etc…