Here is a list of the necessary equipment for cookies in my very arbitrary order of importance.

The Mixer: You need a REAL mixer.

If you can mix your cookie dough by hand; you’re either a heck of a woman (with a wooden spoon that would strike fear into the hearts of small children) or you’re not getting the dough stiff enough.

I happen to love Kitchen Aids. When we first got married, about 20 years ago, I got a Stuff-Mart-Special mixer and it lasted about three months. So did its first replacement. Ric concluded that I must need a Super Duper Stuff-Mart mixer. He was right. It was better. I think it lasted a whole year before I burned out the motor. After some quick math he decided that a Kitchen Aide (which “they” say lasts a lifetime) would pay for itself in about two years at the rate I was burning through Stuff-Mart Specials. So, He brought home a little white Kitchen Aid with an adorable red stripe that made it about 17 years before every part and hinge had begun to rattle and the finish was worn off of both the blade and the replacement blade. In mixer mileage it probably had about 300,000 on the odometer but it was still grating cheese and turning out good cookies. I loved that little mixer – much more than one should love a simple piece of equipment.

But, Ric saw the writing on the wall and for my birthday last year he seized upon a fortuitous coupon and bought me a new one. 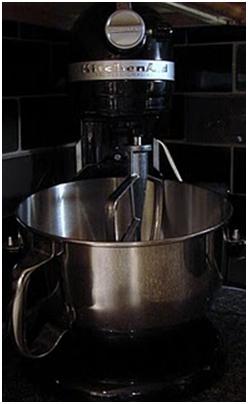 Darth is much bigger and heavier than The Little Clone Trooper he replaced. They looked so cute together that I was entertaining notions of keeping them both but Ric looked  at me with furrowed eyebrows every time I joked about that. I got the hint, and now The Little Clone Trooper has gone to live in a kinder, gentler home with my friend Kara where less will be asked of him in his geriatric years. Darth and I are still bonding, which is hard with a machine called “Darth”, especially when you’re not much of a Star Wars fan. I keep trying to switch to “Darthy” but it’s not working.

Oh, my. In case the point got lost in my story, it is this:

Baking Stone: I use a baking stone because it offers more forgiveness when you forget to set the timer. Metal pans turn out black bottoms at the slightest overheating because they conduct heat so much more readily than the air in the oven which is touching the rest of the cookie. The stone on the other hand, isn’t a great heat conductor, but it is a great heat holder which is what you want. My husband, the scientist, is cringing at my vocabulary I’m sure, but what I mean to say is that the whole process stays stable on stone. Funny, what’s built upon a rock…

Timer – If you’re as distractible as I am, then one loud enough to track you down in the laundry room and remind you that you have cookies in the oven is indispensible.

Oven Thermometer: You have to know your oven and it’s worth a minor investment in an oven thermometer if things don’t seem right. During the experimentation days at West Point I had a deranged government employee of an oven that would randomly heat to a different temperature from the dial – and not by predictable percentages. In a very aggravating way, this taught me the importance of temperature. I began to live with a thermometer on the middle rack and work with the moods of the appliance. What else can you do?

Scoops and Spoons Spatulas: For years I used a spoon and my fingers to shape the balls of dough. Now I use a scoop and my fingers, but honestly I don’t think it makes that much difference. You shouldn’t need a spatula very much if your butter is firm enough (see next post) but once in a while you have to shove around ingredients that are straying from the mixing area. A nice stiff, flat rubber spatula is what you want for this job.

Cooling rack – Probably just as essential as a real mixer, but doesn’t have to be fancy.