My family is always enthusiastic about quiche!

Eggs, cheese, flavorful ingredients, pie crust…what’s not to like?

Here’s the basic recipe for a Quick Spinach Quiche:

Bake at 425 degrees for about 35 minutes. Makes two pies.

You’ll notice in the picture below that my bacon strips look an awful lot like turkey kielbasa. That is what happens when you write bacon at the top of the grocery list and then leave the list in the car. You get home, smack yourself in the forehead and then rummage through the refrigerator for an alternative. The kielbasa was fine, but I think I prefer bacon. I thought about not blogging because I messed up again, but if I dropped blogging every time I deviate from the ideal form of a recipe I would post something about once a month – in a good month. And, I guess we’re highlighting the point that quiche is versatile.

On a remembered-the-grocery-list kitchen catwalk, you would fry the bacon while sautéing the onion in some oil. But in this case…

The box of frozen spinach gets a nice warm shower in a colander until it’s thawed.

Then I wring it out. You don’t want green spinach juice turning your quiche into a soggy rendition of something out of a Dr. Seuss book. 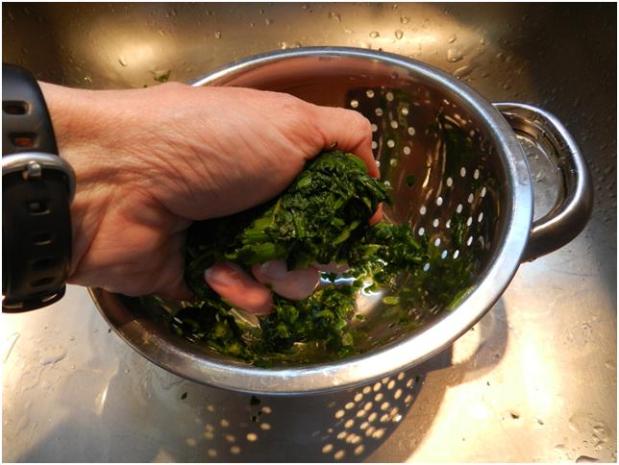 There’s really not much in a box of frozen spinach once you take out the water!

I usually have sliced Swiss cheese on hand, but it need to be in shreds, so I just cut the slices into thin strips and it’s close enough.

Put the cheese in a small bowl and drop in the flour.

Toss the two until the cheese is coated and there aren’t any pieces sticking together.

Crack the eggs into the half-n-half. 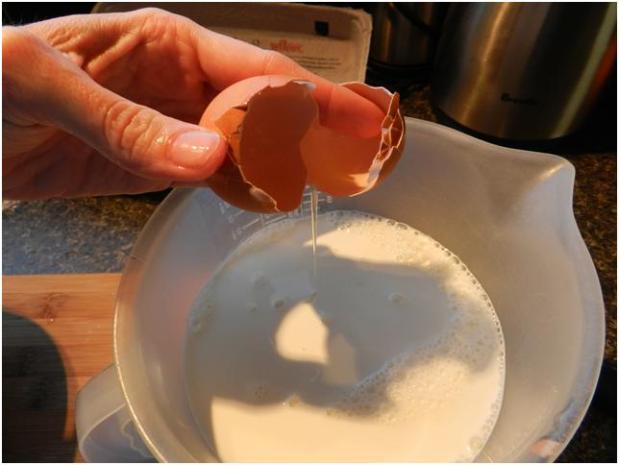 Stir vigorously with a whisk. (Hard to do that and take a picture at the same time!)

Keep checking on the meat. It took a while for the moisture from the kielbasa to evaporate and the browning process to begin.

When the meat du jour is cooked, soak up any excess grease and oil with a paper towel.

Put the crusts into the pie plates and try to make it look nice. Surely you can do better than I do – even my 13 year old son can!

Then, divide the meat between the pie plates.

Decompress the spinach ball and sprinkle it evenly over the meat. 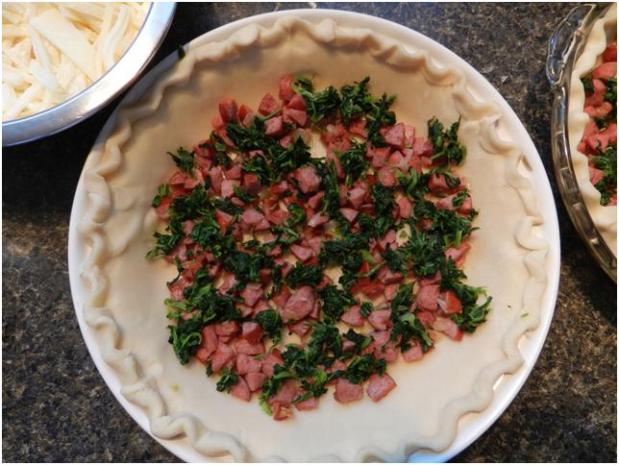 Spread a layer of cheese on top of that, and sprinkle with salt and pepper to taste.

Give the eggs and half-n-half another vigorous stir to make sure the mixture hasn’t separated then pour it between the two pans.

Pop them onto the center rack of a very hot oven (425 degrees) and bake for about 35 minutes. It should look about like this when it’s done.

Let it sit for several minutes before trying to cut and serve. 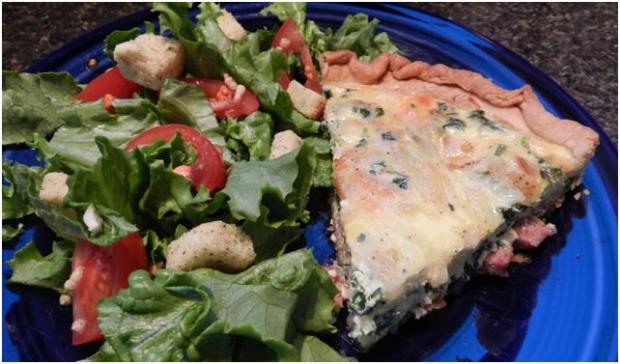