Some people aren’t sure what a leek looks like, so I thought I’d draw one. Then I got carried away with a gardening memory from last summer. What you see below is my rendition of the day I found the supposedly dignified Rouge Vif d’ Etemps Pumpkin plant dragging a poor innocent leek down the row by its throat. It was funny for everyone but the Leek. Silly pumpkin! Leeks are for kids! 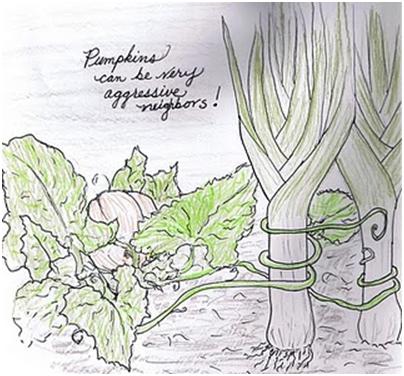 Maybe not all kids like leeks, but mine sure do. J.P. spotted the last bag in the freezer a few days ago and launched a campaign for soup until I let him loose in the kitchen. He did a marvelous job! (Original posted 3-18-2011 on the old blog.)

First, peel and chop the potatoes.

You don’t need these pictures, but I’m proud of my kiddo!

Heat the butter to bubbling, toss in the leeks and sauté until they are soft and the house smells absolutely FABULOUS. 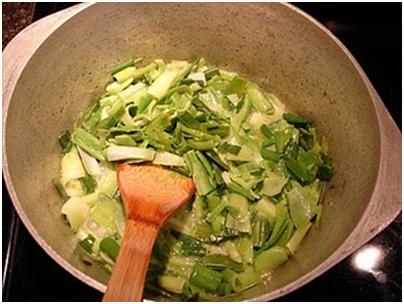 Leeks in the Butter

Dump in the flour and stir to make a paste. (We missed pictures of this step because the neighbors stopped in with their adorable baby and JP and I were both so happily distracted that it was all we could do to remember to stir!)

J.P. with baby Will.

Start adding the milk, little by little, stirring until you have a smooth paste before adding more. Once you’ve added it all you should have a liquid base without lumps. (If you’d like a richer soup you can use whole milk or even substitute a little bit of half-n-half for some of the milk.)

After the Milk has all been Added

Add the rest. Pour in the broth and dump in the diced potatoes and corn. The smaller the chunks of potato, the faster they cook.

Ready to Simmer for a While

Let it simmer until the potato chunks are tender enough to break with the edge of a wooden spoon. Taste, and add salt and pepper until it’s just right.

If you like a creamy soup, then stick the immersion blender into the pot and run it for a few seconds until you get the consistency that suits your fancy.

Last, but not least, share with the neighbors that let you hold their baby. 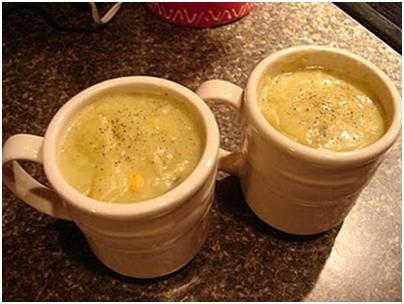 Cups for the Neighbors