The fancy French word for this sauce is “Béchamel”.

I call it “Cream-of…” sauce, because it’s basically what you get when you buy a can of cream-of-mushroom (or cream-of-whatever-else) soup to use in cooking – only it’s better – and it makes you feel like a real cook.

Variations on this sauce form the base for homemade macaroni-n-cheese, Alfredo, tuna casseroles, creamy soups, pot pie fillings, biscuits-n-gravy and more. It never stands alone in the form you see below, but knowing how to get the base layer accomplished is a handy tool for so many recipes.

Start by melting the butter on medium –low heat. When it’s bubbly, toss in the flour. (Other fats can be used according to recipe directions, and vegetables can also be added to saute at this stage but otherwise the procedure remains the same.)

Mix until it makes a smooth paste. Keep stirring until it is bubbly again and the butter begins to turn golden. The flour needs to cook a bit at this stage to avoid having a pasty texture in the final sauce. (Keep the heat at medium or less and go slow if this is a new procedure for you.)

Begin slowly adding milk – about ¼ cup at a time to start with and mix everything back into a smooth paste before adding more. 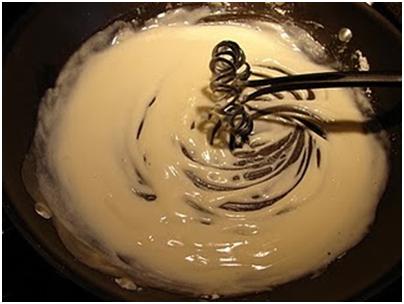 Add more milk when it’s back to looking like this.

After the first cup of milk has been added and the sauce is thinning out, I go ahead and dump the final cup of milk in all at once. It will then seem too runny, but as it simmers over low-medium heat for the next 10-15 minutes it will thicken considerably. While it’s simmering it needs to be whisked frequently (at least every 60 seconds) or it turns into various kinds of messes. Add salt and pepper to taste – which, of course, means you have to taste it.

This is about where you want it for sauce – to add cheese, etc…